How to draw attention at the Branch Out Bike Tour

Greg Van Tighem drew some attention on his bike with fat tires at the Branch Out Bike Tour this past June. Click to find out why he rides with above average wheels!

Pushing down hard on the pedals, one… two…. three… four. Greg’s wide tires move slowly along the pavement. Road bikes whiz past quickly down the highway.

To say the least, Greg Van Tighem drew some attention on his fat bike at the Branch Out Bike Tour this past June. Riding a fat bike makes rides more difficult because of the extra weight and wider tires. Everyone at the tour was left wondering why he would choose to suffer this self-induced handicap.

“A fat bike tends to draw attention, and that equates to more awareness and ultimately more funds for the cause,” said Greg.

Greg doesn’t suffer from a major neurological disease, but he imagines riding a fat bike in a road competition gives him a taste of what it would be like. Going through life with every effort having a major physical or mental pushback, while the rest of the world easily breezes by.

“At the end of the day I can put the bike away and kick back. Those dealing with the effects of MS never get a permanent break from the suffering.”

Having a lot of friends with MS, over the past few years, Greg’s personal goal has been to raise funds, awareness and to provide hope for those living and dealing with MS.

Last year Greg cycled the complete length of Highway 93 from Wickenburg Arizona and back home to Jasper in just 21 days. Accumulating over ninety-six thousand dollars, he was the top fundraiser in Canada, but still felt he fell short of his goal to raise awareness and hope.

This year he decided to ‘kick it up’ a notch. In March he cycled from Masset Haida Gwaii to Winnipeg on his Fat Bike. The ride took him 29 days and he experienced a lot of highs and lows, such as terrible weather, bad roads, and traffic.

At times Greg honestly felt like quitting, but he states it was the great people he connected with and those who supported him in person and online who motivated him to continue. His solo trips have hundreds of people following him on social media, all-equating to more awareness and funds for MS.

“The biggest benefit is that I am helping people, and that makes me happy. Also, most of my fundraising activities involve cycling, and I love cycling.” -Greg

Greg has truly found a way to use a passion he is good at to give back to others. When it comes to the Branch Out Foundation, Greg is impressed with their outside the box mandate of providing complementary and alternative therapies and treatments for the many varied neurological disorders. He also heard the Bike Tour after party was a pretty fun reward for a long hard bike ride.

Greg is nowhere near trading in his fat bike for a road version anytime soon. He is still working towards his ninety-three thousand dollar fundraising goal for 2014. Check out his next fat adventures on social media and his blog! 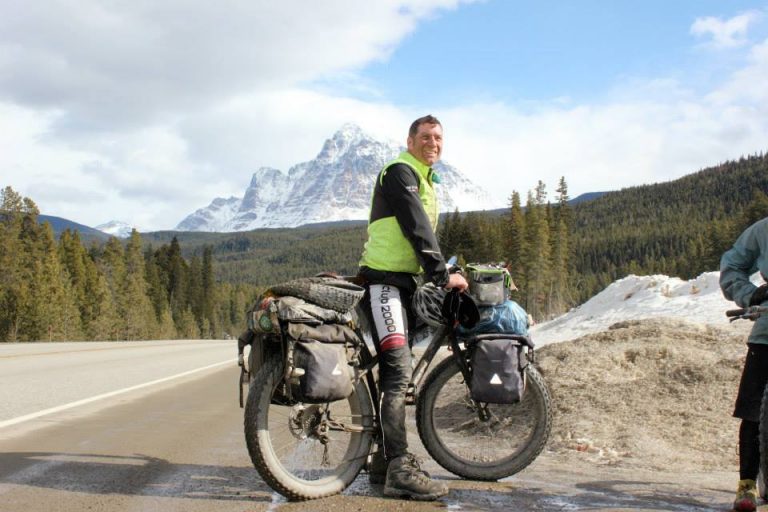